Home » About Us » Ireland 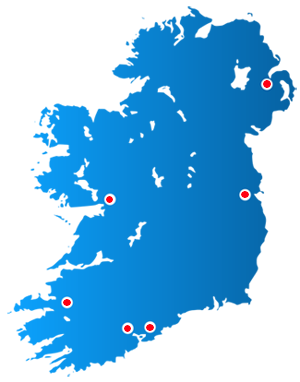 The work and spirituality of the early Sisters of Bon Secours attracted the attention of an Irish woman in Paris, Catherine O’Farrell, and, with her persuasion, 1861 saw the first foundation outside of France. Four sisters came to Dublin, bringing their mission of ‘Good Help’ and ‘Healing’ by caring for the sick and dying in their own homes.

With Ireland still suffering the effects of the ‘Great Famine’ and centuries of intermittent warfare for religious and political freedom, Dublin was an over-crowded and poor city. Sisters of Bon Secours were the first to stay in the homes, caring for the sick and dying for as long as required.

The apostolate of “Good Help” was a startling innovation in Dublin in 1861. It was a new experience to see women in religious dress walking the streets of Dublin and its suburbs on their own, or spending long night vigils at the bedside of the sick and dying. As time moved on, the “Nursing Sisters” as they were called, received calls from many parts of Ireland. Before long it became apparent that these well-trained, spiritual women devoted their care to all, rich and poor, irrespective of their illness whether of a contagious, epidemic or malignant nature. News of the ministry and mission of Bon Secours spread throughout Ireland and Sisters were invited to work in a number of Dioceses and so the Sisters responded to the call to move out of Dublin and foundations were established in Cork, Belfast, Tralee, Galway, Cobh, Mount Desert (Cork), Knock and South America and Africa.